Please consult your pediatrician before you begin solid foods with your baby. I’m not a Dr. or a nutritionist, this is purely the story of my journey with my own children.

For a few years now Baby-led Weaning has been the trend. Are you pregnant or a new mom and have never heard of it? Don’t feel bad, I only heard about it when my daughter was 4 months old. It sounds like you’re weaning them off the boob, but that’s not it at all and I feel like it should really be called something else. In a nutshell, it’s teaching your baby how to eat, but making them feed themselves by hand instead of you doing it with purees and a spoon. It’s meant to encourage curiosity, develop motor skills, and reduce picky eating. A HUGE benefit to it is not buying baby food. After a few weeks, your baby can start eating what your family is eating, with slight alterations. It’s really awesome and super crazy messy, and I’m about to do it again for the second time… so this is my story and how I’m doing things differently the second time around. 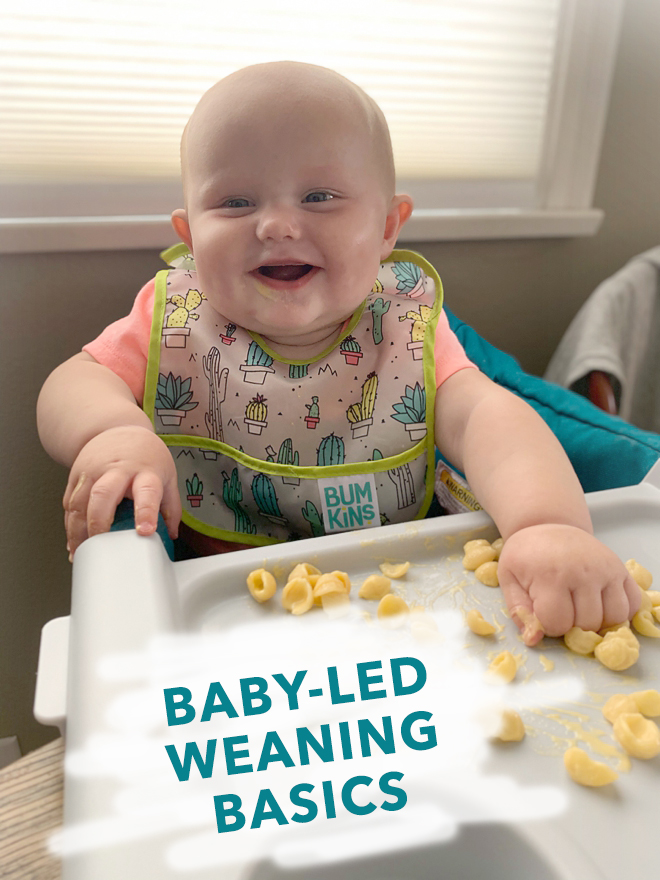 One of my daughter’s Pediatricians said something to me at an appointment like, “I’m sure you’re planning on doing baby-led weaning” and I had no idea what it was, so she said, “look it up, I’m sure you’ll like it”. And in fact, I did. I had been feeding Hadley homemade baby food for a few weeks at this point and she was already desperately grabbing at the spoon. She wanted the spoon, she wanted the food, she wanted to feed herself, so why was I fighting her? Because that is how I thought I was supposed to feed her… and once I did my research on BLW, I stopped spoon-feeding her entirely. The day she turned 6 months old, she was already sitting up unassisted and had 18 foods under her belt, so we started with Banana. I quartered it, let her grab for it, and shove it in her mouth and it was freaking hilarious and wonderful, and ultra messy. From that day forward she sat in her high chair and fed herself, with minimal help from me. After only two weeks, we went to In-n-Out and as we were eating she sneakily grabbed a french fry and ate it! She very quickly learned that she too was entitled to food and taking her out to eat became super fun. She’d happily sit in a high chair and eat from my plate or from snacks I brought for her. This was her first experience with independence and if I do say so myself, it was a successful one. 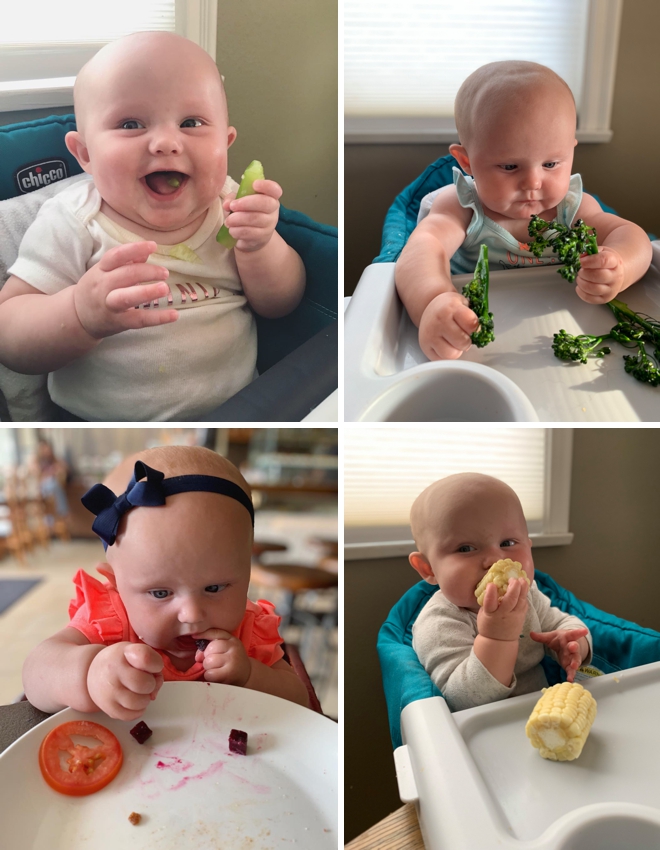 I found a program that challenged me to feed her 100 new foods before she turned 1 and that’s what I did. For the first 50 or so I even took photos and video of each one, then I got pregnant again, and feeding her 5 new foods a week was the most I could do. While we did reach “100”, it was very stressful. I put a lot of pressure on myself to do it and many of the foods were a total stretch, like lamb (which I never eat because I don’t like it), and dragon fruit just to name a few. It forced me to cook and feed her things I wouldn’t ever make for myself or our family just to reach that next number. Some were fun and others were just ridiculous… and I’m not doing that again. 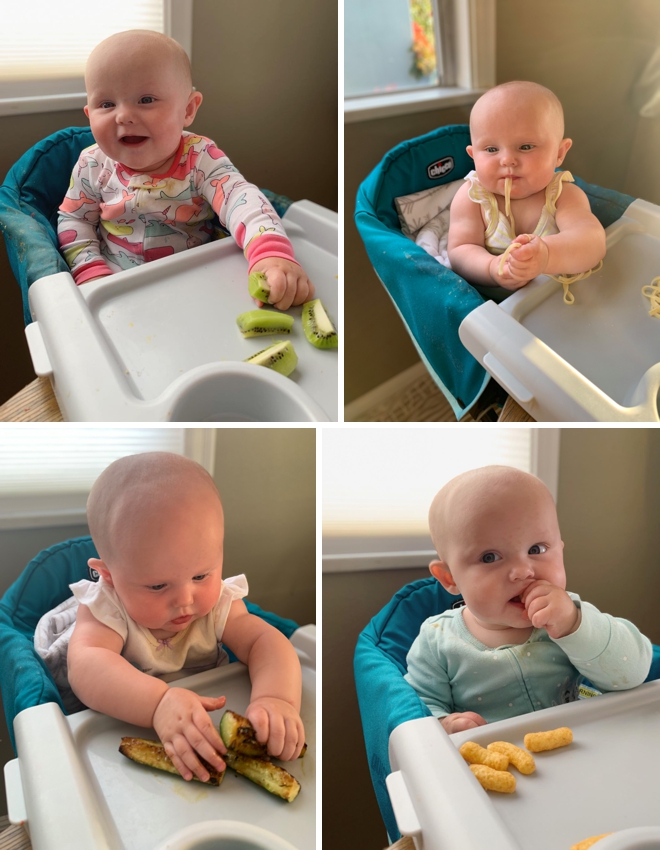 I’m going back to the goal of the whole thing; to encourage curiosity, reduce picky eating, and teach my baby to feed themselves. With keeping that in mind, I made a list of 60 Awesome First Foods for Baby Led Weaning and simple suggestions on how to cook/prepare/cut/serve them. This is the list I’ll be following as I start this journey with my son and I’m sharing a printable version with you in my digital file shop for only $2.99! Print it out and check it off as you go, just like us. 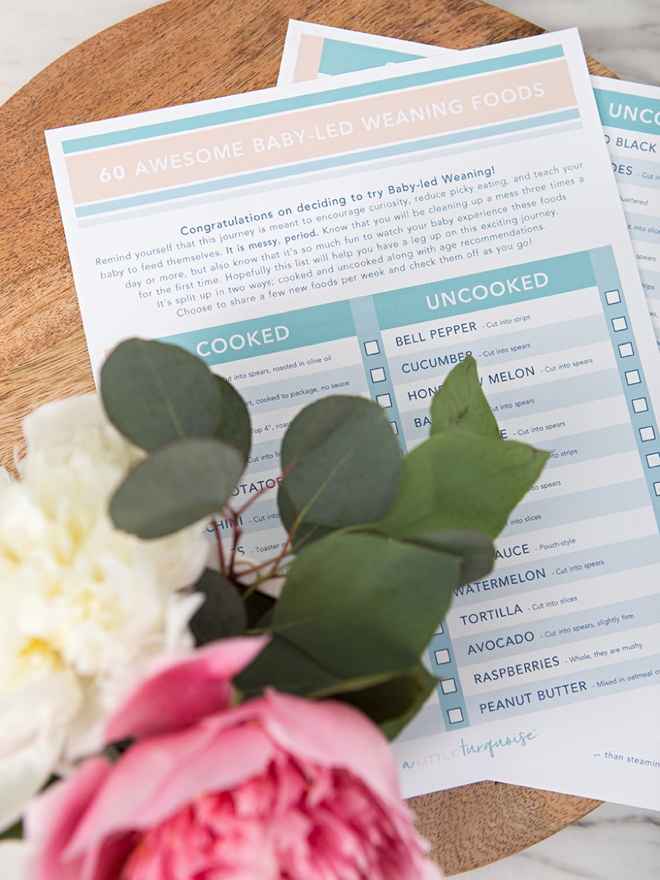 While Hadley was ready to start eating purees around 4 months, my son wasn’t. Just now at 7 months he’s finally showing interest in food. So that’s we start, the baby needs to show interest in food and should be able to sit up unassisted. The muscles required for sitting up help with digesting food and not choking! First, I’m going to make Russy a few purees with my fabulous BEABA Babycook and get him used to the act of actually swallowing food. Which is the same thing I did with Hadley, she’s eating Kale Applesauce here. Then once he’s got it down and is reaching for the spoon, I’ll start giving him the food on the list above. It’s broken down in two ways, things that require cooking and things that don’t, along with foods best for the beginner and the experienced eater. When the foods fit into what I’m making and serving for the family, he’ll get them too and I’ll cross them off our list! Easy, no stress involved. I’d like to add that if some of these foods are a stretch for you, cross them off and replace them with things you’d serve instead. 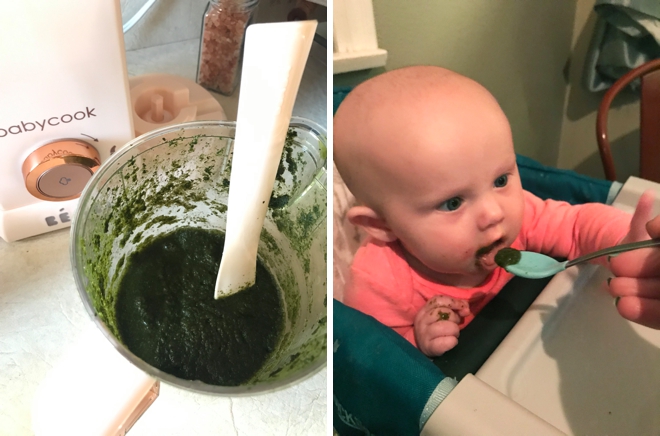 Baby-led weaning purists (LOL) will tell you not to feed your children food in pouches. WHAT..? Why? Who freaking knows. Maybe they really mean whole-fresh foods are best, which I agree with, but I also love organic pouches. I think eating from a pouch is also a valuable skill for them to learn. They need to hold the pouch, squeeze it, and suck; the earlier they learn to do this, in my eyes, the better. Real-life requires food on the go, period. For quite a while I was even making my own pouches. I used this AMAZING set from Amazon and had a blast concocting my own food combos. I loved it and so did the kids and it can be very cost-effective, you just need time. Which these days I’m a bit low on, so Costco veggie/fruit pouches it is, lol. 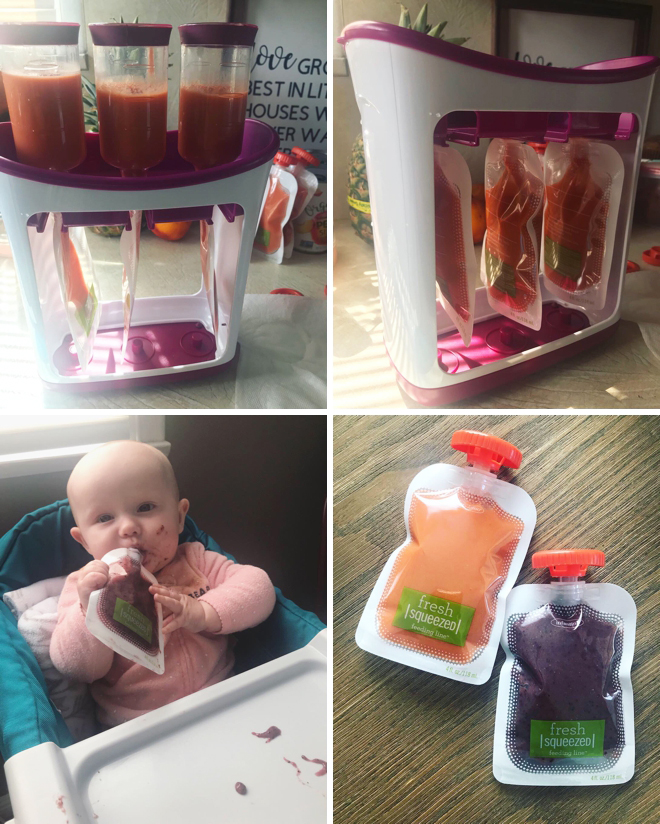 This weighed heavily on me during Hadley’s journey. I’m not sure why as I have no food allergies and neither does my husband, so I guess it was just my weird mama thing. A friend of mine suggested that I serve the foods I’m worried about on the same day as existing Dr. appointments so that if something were to happen, we’d already be going. Which I totally took advantage of… and nothing happened. I also discussed things like strawberries, shellfish, honey, and peanut butter with my pediatrician and followed their advice on the introduction timing. I keep Children’s Benedryl on hand, for anything from a bee sting to hives and possible food allergies too.

Peanut Butter. We introduced peanuts early in the form of Peanut Butter Puffs, and had no reaction at all. Plus they are absolutely delicious! There are new studies out there showing that early introduction to certain foods lowers the chance for allergic reactions. Another great way to do it is to mix it in baby oatmeal. 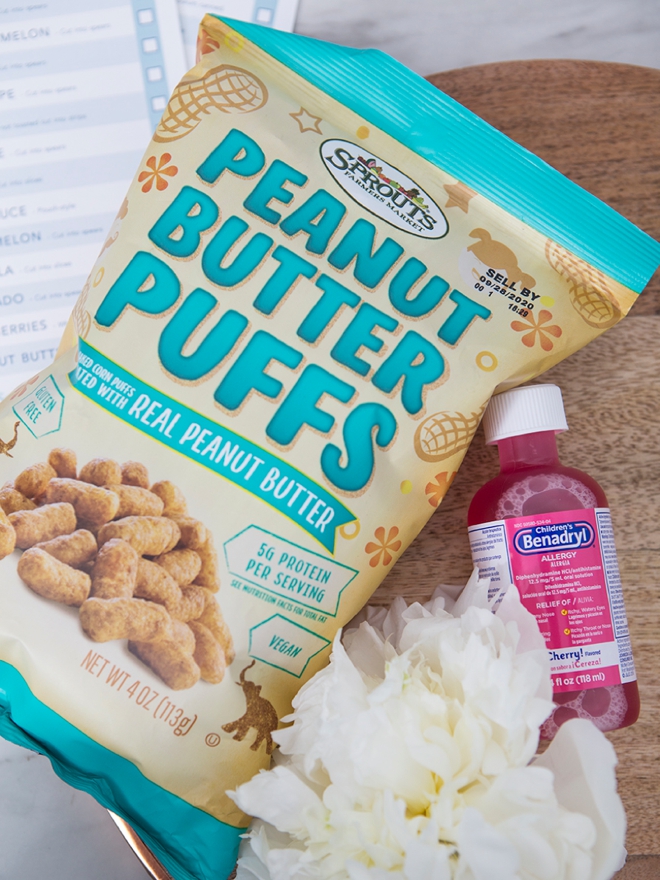 For some reason, this didn’t worry or bother me the way potential allergies did. Babies gag reflex happens much closer to their lips than ours does, which is comforting to know. Hadley gagged like a champ, it didn’t bother her at all. She’d gag and keep going. It’s a normal part of their learning to eat process, but choking isn’t. I found this video on YouTube super helpful for what to do if your baby chokes.

For BLW it is recommended to have a high chair that has a footrest. From what I’ve read, the placement of the feet on the footrest further aids in the reduction of choking and the babies’ overall comfort. I tried out quite a few, we started with this one, and unfortunately many are not made for the messiness of BLW. Then I found this awesome all-plastic chair on Amazon that also just happened to be my favorite color! I’m currently transitioning Hadley out of it and into a booster seat at the table with the family because it’s Russy’s turn to use it! Here he’s sitting with the family at lunch munching on a bell pepper stick, but not swallowing it, I think it feels good on his gums. An all plastic or all-wood chair is a must, nothing with fabric as you need to constantly wipe things down and who has time to be washing an insert every day? 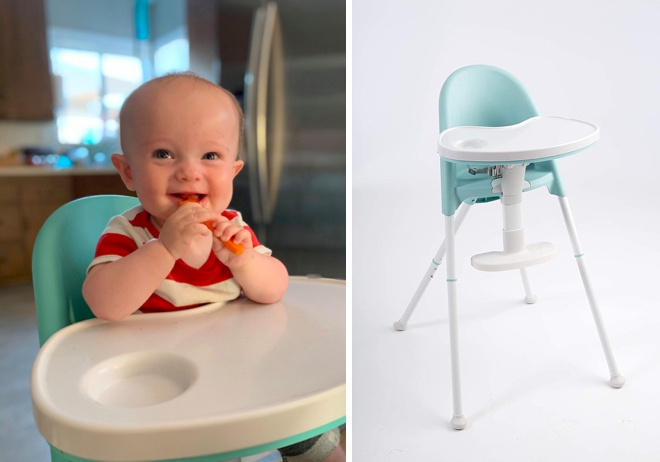 As I mentioned a few times it is MESSY. They get messy, the high chair gets crazy messy, the floor gets messy, the walls get messy, and you too will get messy. The best thing to do is make peace with the mess now. A friend of mine had brand new floors when she started BLW and would put down a plastic shower curtain at the beginning of the day and rinse it off with a hose after dinner, because you gotta do what you gotta do. Magic Erasers for the walls are great, get yourself a large pack of washcloths like these, and bring a bowl of water to your baby to wash their hands, then wipe up from there. This tip I read on Pinterest was a game-changer and she still loves it. Playing in the water a bit helped her learn to wash her hands. I wipe her face while she’s playing which reduces the terror of me cleaning her up, LOL. You’ll learn that some meals are ultra-clean (apples, cucumbers, bread) and others are a nightmare, (avocado, oatmeal, mac + cheese) hahaha. 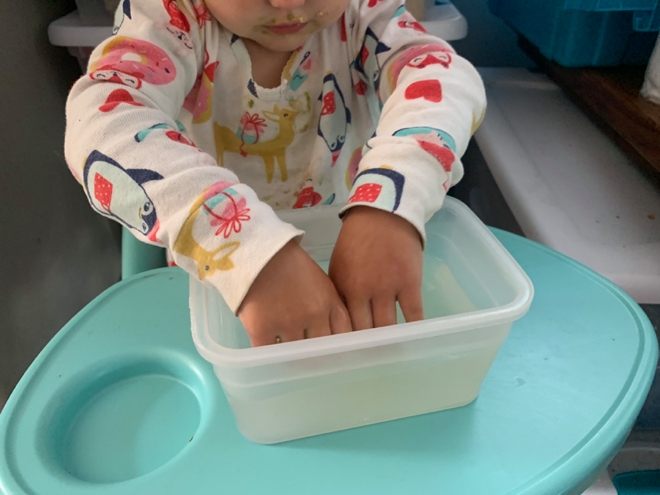 Many recommend plates like these, entire bib shirts, forks/spoons like this, and this tiny cup. I purchased all of them and I only used the tiny cup, Hadley still loves it and it totally helped her learn how to drink! Now at 20 months, she has no problem drinking from a regular cup, including a La Croix can and it’s beyond adorable! The shirt bibs were way too much work and the plates just ended up being another thing to wash along with her high chair tray. Start with less, see what and how your baby does and go from there. I did the opposite. I bought it all and like I said ended up using only the cup. Hadley at 7 months vs. 21 months.

I hope my story has encouraged you to try Baby-led Weaning… and that the mess part of it isn’t too terrifying, haha. As I said, I’m excited to start the process all over again and I’m sure this time it will not only be better but will be different too. It’s wonderful to be able to prepare one meal for your family and slightly adapt it to fit all the mouths in the house. Being a mom is such a crazy wild ride and I’m so grateful to be able to share it with you! 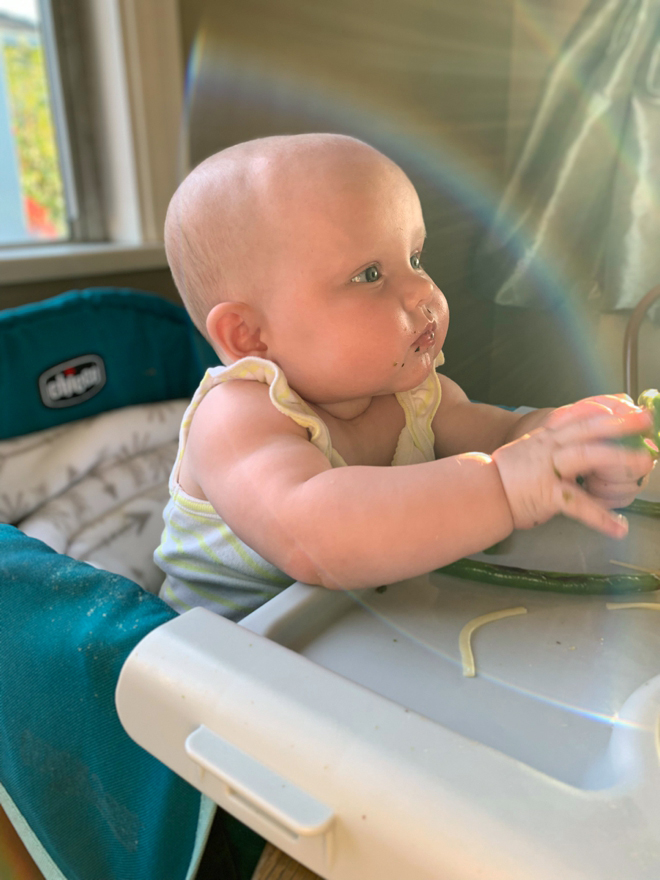