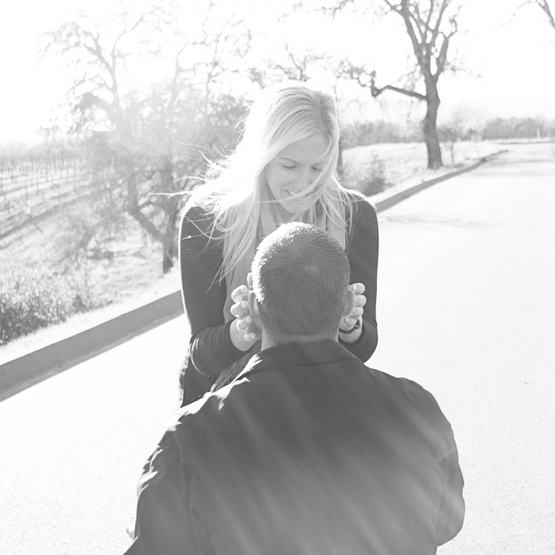 “Marisa’s boyfriend, Brian, contacted me a couple months before the proposal.  He was so excited that he had actually come up with a plan that could surprise Marisa.  His lady is a super planner and she usually knows everything that’s happening.  He was determined to make this something that was a complete surprise and photographed (one of her wishes)! He had everything so coordinated (included having her parents there) that he was giving me times down to the minute…”You can arrive at 3:45, I’ll bring her parents at 3:53, be hidden by 3:58” Seriously!!  It was awesome – she was blown away (and not just by the ring…which blew us all away!!)  They’re both so fortunate to have each other and I’m so honored to have captured this beautiful moment for them! – Mariah Smith Photography

“I contacted a friend of mine and Marisa’s, Mariah, who is a professional photographer. I inquired about a camera that I wanted to order for Marisa for Christmas. We picked out the best equipment for Marisa’s needs. A few weeks later it dawned on me that I could use this for the proposal! I booked a session with Mariah to teach Marisa how to use the camera but in fact it would be a surprise proposal, caught on film.” – Brian, the groom

“For Christmas my boyfriend Brian got me a hot new Canon digital camera, one that I had been wanting forever. Clearly the advanced features were way over my head so with the gift he also purchased a “photography workshop” with a professional photographer. Unknown to me at the time he had arranged this month’s before and the “workshop” was really to be a total fake out…he had a major secret plan for the day! So we met Mariah Smith (the photographer) at Brian’s parents’ home in Windsor, California for the “lesson”.  She told us that she would be showing us different options on the camera (light, aperture, blur, focus, etc…). The first pose she wanted to use was to learn how to focus on the front object and blur the background. So she had me walking away from the camera, with Brian closer to her. Then I heard her say, “Marisa, okay turn around and walk back to me”. There was Brian down on one knee with the ring. I was completely stunned. Everything is a little blurry after that. The walk back to him seemed like miles! He asked me to marry him while Mariah caught every moment on film. I said yes (of course) we kissed and Brian said, “I have one more surprise for you!” I looked up at the house and saw both our parents! I was so happy to have that moment with my mom & dad! Truly a memory I will always keep in my heart. Being a wedding planner I’ve heard literally hundreds of engagement day stories I’ve talked to so many brides who have said again and again how they’d wished the proposal would have been caught on film, never an easy thing to do. Brian knew I imagined something really different and surprising for my own proposal day and he totally pulled it off! – Marisa, the bride